I’m currently the DM for my Friday night game, and there are some diehard comic book nerds in that group. All of us love the X-Men movies, so I decided – as one of the non-comic readers in the group – to take to Wikipedia and learn as much as I could about the X-Men characters I know. My paragon encounters are built using a different system than what you’re used to seeing, so this isn’t exactly what my group faced, but the powers are the same. This is not an easy encounter at level 13, using powers more appropriate for mid-paragon NPCs, but it’s designed to be the set piece combat for your campaign’s chapter. 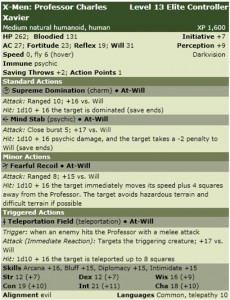 I just had him attached to his chair, which moved with him whether the movement was voluntary or forced. 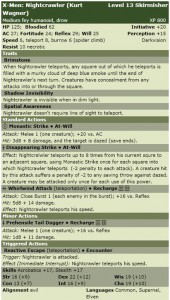 Don’t overdo it with his Spatial Awareness. He can’t stop himself from teleporting into solid matter if he screws up. 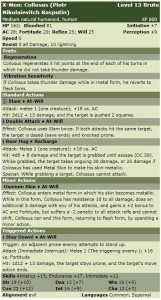 I found the toughest part to balance to be his regeneration. 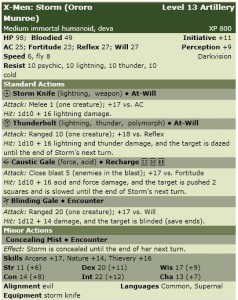 Storm met a fairly horrible end in my game. 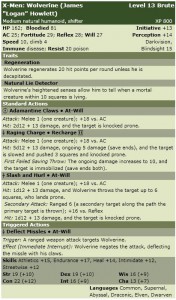 Keeping him alive is not an option.

For those of you who know more than I about the X-Men, your comments are appreciated.